Who is Lebanon’s Gebran Bassil? 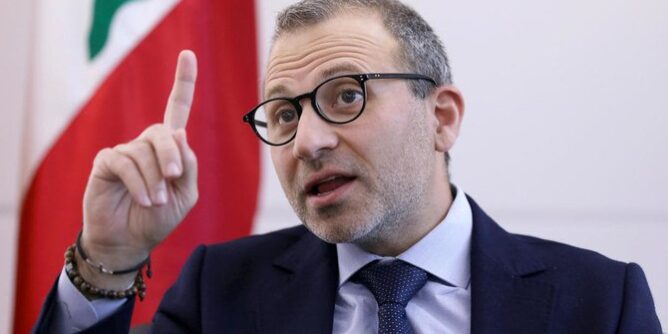 “The systemic corruption in Lebanon’s political system exemplified by Bassil has helped to erode the foundation of an effective government that serves the Lebanese people,” Treasury Secretary Steven Mnuchin said in a statement.

A senior U.S. official said Bassil’s support for the Iranian-backed Shi’ite Hezbollah movement which the United States deems a terrorist group is “every bit of the motivation” for the move to sanction Bassil. Washington has sanctioned several Hezbollah members. Visit here; Gebran Bassil.

Bassil is one of Lebanon’s most influential politicians. A Maronite Christian, he harbors presidential ambitions and has been Aoun’s senior adviser since 2005. Under Lebanon’s sectarian political system the president must be a Maronite.

READ MORE:  Is BoJo soon to be a Hobo?

In 2015, he became head of the Free Patriotic Movement (FPM), founded by Aoun and the biggest Christian political bloc in Lebanon’s sectarian power-sharing system. The FPM has defined itself as a party defending Christian rights.

Bassil, 50, is married to one of Aoun’s three daughters, Chantal.

Saad al-Hariri, who last month was named prime minister for a fourth time, has described Bassil as a “shadow” president, a comment reflecting the widely held belief that he exercises substantial sway over Aoun, 87, who became head of state in 2016.

Since the FPM forged a political alliance with Hezbollah in 2006, Bassil has defended the heavily armed group as vital to the defence of Lebanon. For Hezbollah, the alliance has provided a Christian seal of approval for its weapons.

Standing alongside U.S. Secretary of State Mike Pompeo in 2019 during a visit to Beirut, Bassil disputed Washington’s designation of Hezbollah as a terrorist organisation, calling it a group with large popular support and MPs in parliament.

In a recent speech, Bassil said some in his party were questioning why it was sticking by its “understanding” with Hezbollah, saying the party was paying a heavy price while the Shi’ite group was not doing its part to reform Lebanon.

“We say to them that we are with them against Israel and terrorism”, Bassil said, the latter a reference to Hezbollah’s campaign against Sunni Islamist groups including Islamic State.

“The price, even if we pay it, is the defence of Lebanon.”

Bassil told Reuters in July that Lebanon, grappling with an economic meltdown, was facing a “financial siege” imposed by international powers as foreign donors linked any bailout to reforms to tackle endemic corruption and waste.

“When there is a desire to help Lebanon, tomorrow the gates will be opened. And when there are great powers blocking the gates, Lebanon does not have capacity to open them,” he said.

Bassil has been a target of protests that erupted in October 2019 against a political class accused of bad governance, mismanagement and rife corruption that pushed the economy to collapse. His critics associate him with the numerous failures of the state as the FPM’s role in government has expanded.

The clearest example is the failure to address the loss-making power sector that cost state coffers billions of dollars while power cuts persisted despite promises to fix the grid during a decade of his party’s control of the energy ministry.

Bassil says he has been targeted for “political assassination” and demonized by his adversaries. He said on Friday that the U.S. sanctions did not scare him.