What Are the Different Types of Tennis Shots That Players Use Today? 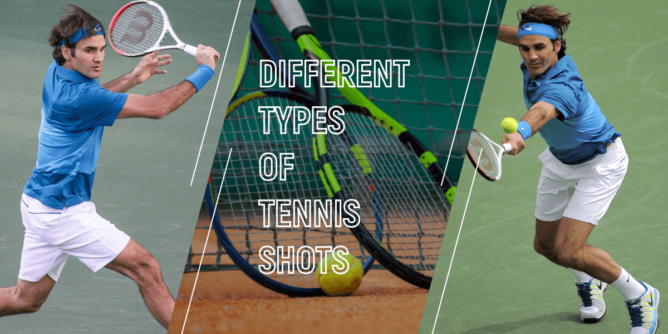 A whopping 60 million people play this exciting, fast-paced game around the world.

Now, there are all sorts of reasons tennis is so popular nowadays. One of the main ones, though, is the wide array of possible shots that make the game so interesting to play and watch! Want to find out more about them?

You’re in the right place. Keep reading to discover the most common types of tennis shots used by players today.

A new player’s worst nightmare, serves are crucial and challenging types of tennis strokes to master! They mark the beginning of every point and involve tossing the ball up into the air before hitting it into your opponent’s “service box”.

Whether you’re serving from the left or right-hand side of the court, players have two chances: the first and second serve. Either one can be hit “flat” (without spin) or with “kick”. The latter option is when a flick of the wrist whips topspin into the ball and causes it to bounce up off the court.

Groundstrokes are the most common type of tennis shots. The foundation of any rally, they’re hit on the forehand or backhand side, usually with your feet positioned behind the baseline. You can hit them down the line, across the court, or, frankly, wherever you want!

There’s much more to groundstrokes than that, though.

You can play them with different kinds of spin as well, such as topspin or backspin. That’s where you hit up and over the top of the ball or down across the back of it, respectively. You can also hit groundstrokes “flat” (meaning there’s no spin on the ball) or “sliced” (which is a synonym for backspin).

Commonly associated with the rapid rallies of grass-court tennis, volleys involve hitting the ball before it has a chance to bounce. You can hit either forehand or backhand volleys and you’re usually at the net (or approaching it) to do so.

READ MORE:  Why should you go with the option of playing the game of online poker?

Then there’s the half volley to talk about.

This is where you hit the ball right after it’s bounced; when it’s on the rise. A tricky shot to master, hitting the ball early like this is a great way to speed up a point and force your opponent into a difficult position.

Imagine you’re in the middle of a rally and manage to force your opponent to the very back of the court, behind the baseline. Seeing them out of position, you decide to slice the ball so it drops just over the net.

Voila, that’s a drop shot! It’s an advanced shot that even the best tennis players struggle to pull off sometimes. However, drop shot tennis is also ideal for catching opponents by surprise, wrong-footing them, and/or putting the ball out of reach when they’re far from the net.

As you can tell, there are many different types of tennis shots to know, learn, and love! With any luck, this post has shed useful light on a selection of the most common ones. Keep them in mind and you’ll be on your way to becoming a better player in no time.

Hungry for more information on this topic and others like it? Browse the “Sports” section of the website now.