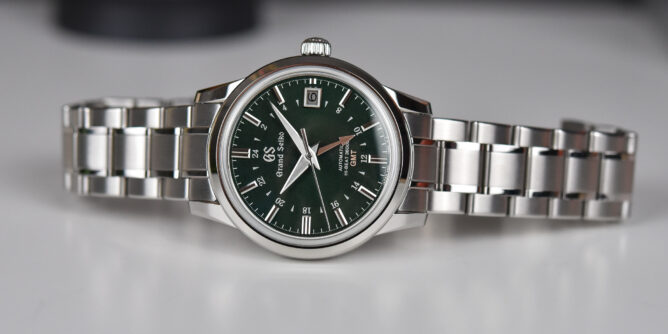 What do you think about quality watches? Grand Seiko is one of the most excellent watches with the highest quality. Grand Seiko started in 1960, created by Daini Seikosha and Suwa Seikosha. They made these timepieces to compete with Swiss watches. The first Grand Seiko made by Suwa Seikosha is a chronometer-grade watch produced in Japan. We consider it an innovative and prestigious style of watch. Over the years, the brand is known for producing some of the best quality timepieces for people around the world. If you are wondering which ones to get, here is a quick list of the best collections of the brand.

Grand Seiko proves that Japanese watchmakers have more and more products to offer. Check them out below.

The innovation of the brand continues. The water-resistant feature and the self-dated timepiece were developed and introduced in 1964. This is named Grand Seiko Self-dater, which proves how durable these timepieces are.

Next to come in 1967 was improving the look of the watch to make it more iconic. That is why they created the 44GS model; it has reflective hands and indexes. The Shoji sliding doors inspired its polished frames.

In 1968, Grand Seiko 45GS was introduced. It is the first watch with an instant time change feature. Next to this was highlighting the accuracy; they came up with the Mechanical 61GS and 45GS. This timepiece feature was the 1-minute monthly date accuracy rating. After that, Grand Seiko had a new idea which is reducing the caliber size of mechanical watches.

READ MORE:  Why is a Custom Engagement Ring the perfect gift?

In 1970, 56GS was an example of the thinner version of the Grand Seiko’s mechanical watches. It features a 4.5mm-thin self-winding caliber.

After having magnificent releases in the previous years, Grand Seiko had another bang! It developed and introduced its most significant legacy in Japanese watchmaking. In 1988, it introduced its first quartz watch. It was the 95GS that featured the boosted accuracy of a yearly rate of 10 seconds. All this was made into reality as the watchmakers had the full attention to its details and development.

But the Grand Seiko was not content and wanted their watches to be more sophisticated, so they developed a 9F83 caliber in 1993. These watches highlight four significant features: instant date mechanism, backlash auto-adjust mechanism, twin pulse control system, and protective shield. The brand has more to offer as it innovates dream-like watches. Its legacy does not end there because it continues to create more in the 2000s. In 2003, it made the Reinforced Magnetic Resistance.

The advancement brought by the technology also gives Grand Seiko a step to micro-engineering. Micro-engineering has been used for making these Grand Seiko mechanical and quartz watches. Aside from using technology, the use of human talent and skills is one secret of the brand. The inspiration of every timepiece made is from light and shadows. Each one has aesthetically made as this brand also promotes the traditional inclined company.

READ MORE:  Diamond Shapes in Detail and Regal Diamonds to Opt for an Engagement Ring

The brand produces an exquisite exterior and interior design that makes it a world-class mechanical watch. This aesthetic touch of the brand attracts every watch enthusiast in the world. Grand Seiko was the first watch company to produce a quartz watch with a combination of craftsmanship and superior technology. They carefully made their products to become beautifully crafted and have the best accuracy, durability, legibility, and quality. The brand was the most innovative and advanced watch company to produce both mechanical and quartz watches.

By years, they had continued to create not only to impress the consumers but to show advancement and innovations. As the market demands more of its products, it became the stepping stone for Seiko to go outside its shell and be independent of its parent company soon after it considered itself a standing-out luxury brand. The innovations and dedication help Grand Seiko to jump into this chapter. They made Grand Seiko with micro-engineering and craftsmanship; that’s the reason the product they produce is guaranteed and highly recommended. Some people might say that some clients buy these watches because of the brand and its luxury value, but they are wrong. These clients are buying Grand Seiko for it is timeless and has the best quality.

Why Should People Buy Grand Seiko?

Grand Seiko watches were known for their traditional and technological essence. The products are with the most advanced and crafted features. The company features its four innovations; Instant Date Change Mechanism, Auto-Adjust Mechanism, Twin Pulse Control System, and Protective Shield. These features are a great help in producing world-class watches. After bringing the innovations and creativeness, the milestone of Grand Seiko continued.

Year after year they provide new ideas and timepieces that are highly durable and worth buying. Every watch enthusiast dreams of a clock that has quality, uniqueness, and worthiness. That dream was and always fulfilled by the brand. Every watch that this company designs and releases is undeniably valuable. So, why is Grand Seiko worth buying? Well, it has three important reasons to avail the items.

First, it is because of its accuracy. Knowing that it is a leading brand for watches, the company works on its accuracy to make it more convenient for the buyer. These buyers will not adjust the official time as the item itself already has the Auto Adjust Mechanism.

The following reason was its Quartz Supremacy. It has the most exquisite design from the exterior and interior of a quartz timepiece. They incredibly crafted every developed and released quartz watch with passion, talent, and micro-engineering. These are their advantages among other watch companies, whether it is old or modern. Also, the very reason for its worthiness is because of its highest quality.

READ MORE:  List of the 5 Most Expensive Watch Brands Sold at Auctions

Grand Seiko also offers durability, uniqueness of the style, and the dedication to give the best to the clientele satisfaction and need from its accuracy and design. Grand Seiko is unique in its fashion because the company has Japanese arts. The success of this industry was a fact of uniqueness of style, accuracy rates, and durability that fits everyone’s criteria for buying a watch.